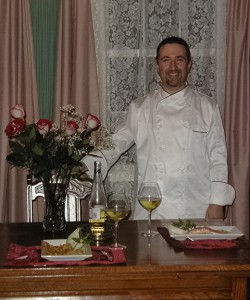 Now, if there ever was a rant page, this may very well be it, eventually.I’ve been a home chef for many years. Inspired by any idea I can get my hands on, food just flows out of my hands. Between burns and scalds, I occasionally come up with some interesting stuff. I started cooking a bit later than Joseph, around the age of 15. I was pretty good with a wok in those days, and would make Chinese food for my parents. Somehow, my sister was never around for it. One day, maybe I’ll relate the infamous “Welcome home, I made a cake for you while you were gone, and here’s the remaining slice” story.

My training is pretty informal, if anyone is really interested: learning to make apple strudel on my bubby’s knee; trying to eek out techniques from my mom, who, by the way, may be the best Jewish cook on the planet; attempting to steal my dad’s kosher pickling technique, let me tell you that this is hard, because he sneaks in a few tricks when no one is looking; taking over a sushi kitchen in a restaurant of a friend of ours in Houston for recipe development; and studying briefly in France. Mostly it’s been trial by fire.

The biggest challenge I’ve had is coming up with recipes that the whole family will eat, and still not be boring. Heck’s Kitchen actually started years ago when I cried out, after having to make four separate meals for four people, “What is this place, a restaurant? I’m in Hell! No, I’m in Heck!” I decided at that point that if I had to make dinner, I would do only one menu. If the kids wanted to help, well, that would be different, and we could get elaborate.

But let’s be serious. I do know my limitations and I’m certainly not on the calibre of a top-tier restaurant chef. Those chefs have my deepest respect. My day job, which I’ve been told I shouldn’t give up, is as an indestructible computing consultant. That’s where I think I’m needed, so that’s where I’m staying, until someone says otherwise. Of course, a Heck’s Kitchen bed and breakfast is not out of the question some day.

My posts are here.

February 25th, 2007
This is a special blog day, to explain the real reason why we’re doing this kitchen renovation and why I’ve had to take responsibility for becoming the chef of this place. I had an allergic reaction to food served at a supposedly reputable restaurant today and am in a lot of pain.It’s all about managing what goes into my body and those of my family. What gets to me more than most of you can imagine is the pervasive lack of responsibility taken by the restaurant industry for protecting the rights and health of their customers. Having allergies is not pleasant for me, but I am very clear when communicating with you, restaurant owners, managers, chefs, and servers. The fact that you either don’t care, don’t know, or don’t take precautions, is going to make someone very sick some day. I can only assume from this lackadaisical attitude, that your conformance to health regulations is equally shoddy. Frankly, people, if you ignore someone’s allergy, or serve substandard food, you are, in my opinion, guilty of assault, and should be prosecuted. Today was the last straw, and I can tell you that there is a Chinese restaurant in the Sheppard/Yonge corridor in Toronto that will never, ever, see another dime of mine.To the point, then. I cook because I don’t trust you. I cook for my family because I will not risk their health because you choose to put your profit margins against the safety of the people who pay you high prices for you to put our health at risk. You are a danger to everyone you serve. I know that the reputable chefs out there are not deserving of this obvious ire on my part, but your cohorts are ruining it for you. Take some responsibility for stopping them before they kill someone. What happened today will cause me to question whether I want to spend hundreds of dollars to eat at your restaurant. And, it’s mostly likely that I will choose not to. As a customer, there is nothing I can do but express my distrust by not eating at your restaurant. Prove to me that you are worthy of my trust, and I will frequent your establishment. Demonstrate that you don’t care about the health of your patrons, and you will have to live with the consequences.The reason I chose to devote so much time, study, money, and effort, to being the best possible cook, hobby chef, whatever you want to call me, is to be able to eat the way I want to eat, using the freshest of ingredients, and the best techniques, without having to live in fear. I fear your attitudes. I fear your apathy. I fear your ignorance. Now prove my fears unfounded. I live in Heck, because of you, not because of me.
February 2007
We’re deep in the throws of renovation right now, so not much is happening in the way of food at Heck’s Kitchen. However, with the limited setup we have in our dining room and laundry room – the make-shift kitchen – we’ve pulled off a chocolate soufflé. If I can pull off a chocolate soufflé in a toaster oven, maybe I’ll get a little respect <smile>. Here are some of the pictures of it:

Incredible as it may seem, we appear to be pretty close to schedule. Talk has now begun for the opening gala. If we were in Ottawa, I think HGTV.ca might actually have picked us up. The invitee list is growing. Now, if Chef Gordon Ramsay would be in Toronto, I’d even let him try my Brussels Sprouts – guess what’s been requested for the menu.

January 2007
Well, New Years came and went and the Tapas plan went wonderfully. It was actually pretty fantastic, and we all stuffed ourselves silly. The problem was the time it took to do everything. The whole event is on our Tapas page. We have one more mean plan for the month, and it’s a celebration of the end of Heck’s Kitchen Version 1.0. Just prior to the renovation, we’re going to do a final meal in the old kitchen.
December 2006
It’s holiday time and I’m pretty well wrapped up in the whole “Kitchen reno” thing right now. Here’s a big surprise: Did anyone think the rest of the house was any better than the kitchen? You wouldn’t believe the horror of the 1980’s wallpaper. So off with the wallpaper, and on with the custom wainscot. This gave me the excuse to get a collection of power tools that equips my workshop almost as well as the new kitchen will be.Given Joseph’s request for teeny stuff for New Years, I’m thinking Tapas. We’ll just have to see. Next step is to get him to research what tapas is, and let him start planning. Watch the menu page to see whether he comes up with anything.
October 2006
Halloween was pretty funny at Heck’s Kitchen. The pumpkins came out, and the costumes, and the spinach. My sons encouraged me to dress up as a scary person, so donning my chef smock, and blond highlights, I transformed into Chef Ramsay (no offence meant, Chef). I’m not sure whether the trick-or-treaters were more scared of the outfit or the creamed spinach I tried to serve instead of candy. I only had one taker for the spinach, and that was a parent. Wait until next year: Brussels Sprouts. Here’s a picture, of our place, for the festivities: 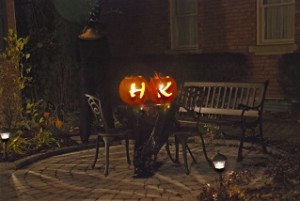 This recipe was first made on Halloween.