While we haven’t actually seen one, apparently a common air duck has been flapping around inside the ceilings. We think this is an example of Anas ventilatoricus canadenses, or the common Canada air duck (not to be confused with the Air Canada Duck, see diets). These critters are very common, and usually seen in basements. We’ll have more details on this species as research progresses. The large bill of this duck may be large enough to swallow whole schools of Wire Fish.

The Canadian Air Duck is not an entirely happy camper. Living in collectives, like the Borg, this is a social creature, although not with people. It hides as much as it can, probably from embarrassment (or fear) about the mould that grows throughout the inside of its body. It prefers to be cleaned through nice visible ports (see image). However, more often than not, large power cleaners, called duck cleaners, are inserted into larger ports. This may explain the surprised look in the duck’s face. Ducks also like the scent added to natural gas, so tend to hang out near leaky gas pipes.

One of the problems raising this critter is that it develops chronic gastrointestinal problems as it ages. The Air Duck definitely does not like either of the common invasive surgical techniques that must be used to maintain it in healthy form.

We’ve got an actual photograph of part of the massive creature in its native habitat. 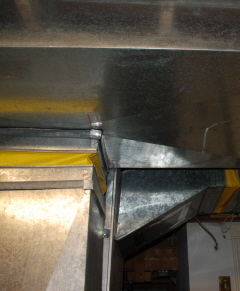