I’ve been a home chef for many years. Inspired by any idea I can get my hands on, food just flows out of my hands. Between burns and scalds, I occasionally come up with some interesting stuff. The biggest challenge I’ve had is coming up with recipes that the whole family will eat, and still not be boring. Heck’s Kitchen actually started years ago when I cried out, after having to make four separate meals for four people, “What is this place, a restaurant? I’m in Hell! No, I’m in Heck!” I decided at that point that if I had to make dinner, I would do only one menu. If the kids wanted to help, well, that would be different, and we could get elaborate. Click here for more.

Kris is from the great state of Texas, where cooking is very different from my Jewish/French Canadian background. When I met her, she had no idea of butter tarts or really fresh salmon. No, for her, meat and potatoes, chicken fried steak – whatever that was. Coming to grips with fusing our two cultures has been a lot of fun and frustration. Most of the frustration came from the dysfunctional kitchen equipment we currently have, and motivated our renovation.

We finally got Kris into the new kitchen and she’s absolutely raving about the stove. Her fried catfish came out pretty well, in my opinion, but not hers; so, she’s now on a tear to make it better. She’s officially been promoted to Sous Chef, at long last, and I’m getting to take a back seat.

To a large degree, Heck’s Kitchen is inspired by Joseph, but I’m going to let him speak for himself on this one. After all, it’s his space too. Click here to go to his page.

My younger son, now nine, is Rhys, and a bundle of enthusiasm he is. He’ll try just about anything, once, or maybe twice, but you’ll never know when he’ll decide something is yucky. He’ll tackle just about any job in the kitchen I give him, but he’s yet to graduate to knives and heat. Rhys has all the makings of a great breakfast chef.

Here’s a quick shot taken of the three guys, a bit exhausted, after finishing up making our first dinner together for Kris, back in August 2006: 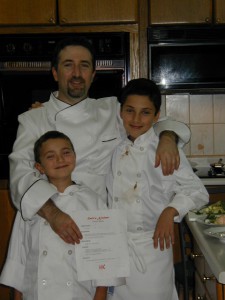