We are all horribly sad to say that at 11:30 today (January 22, 2014), we had to say good bye to Chevey. He was very sick and could not  keep going. He was a very important part of our lives, enriched our well being, and gave us years of joy.

A tribute to Chevey can be found here and his history is on the page below as well as some of his musings.

In January 2007, we welcomed into our family, the latest addition, Heck’s Kitty, officially known as Canicspots Cheveyo, or Chevey for short. This spirit warrior (or possibly a Hopi mythological monster, depending on who is doing the translation), is an twenty month old F7 SBT Bengal and has joined our family after retiring from a local cattery. This Heck’s Kitty Blog will be his take on our family and renovation – with a little help, of course, from his people. His arrival date at Heck’s Kitchen was January 30th, and he’s definitely trying to take over. But hopefully, he won’t get any unauthorized treats. His wild side (about 14.7%) is definitely showing in his adoration of fresh meat. 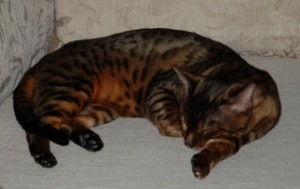 Busted! I was caught relaxing on the couch. Shhh. Don’t tell anyone. It must be all the excitement around here at Heck’s Kitchen that’s got me tired out. Or maybe it’s because I sleep 18 hours a day.

By 10:30 tonight, no one had answered me, so I think I’ll tell people what the symbol means. It means that I’m bored, and I’m going to break some plates. Cool huh? The zigzag pattern is what happens when a plate hits the floor when I push it off the table. Neat? I think so.

March 14th, 2007
My pet parent – what a silly term – Kris, found a picture of an ALC’s face. Randy, my other pet parent, put it in my blog. I’m not telling anyone where I usually put my blog, but it’s kinda clumpy and smelly.
March 13th, 2007
OMGyouguysIfoundthegreatestbunchofcattoysever!!!!So, first, in my master suite, there’s this big, tall, white cloth bag-thing that I could fit about 50 of me in. And get this – it’s full of little stuff I can pull out that smells like my people!! Too, too cool! When I found it last night, I first pulled one or two things out that I really liked and took them over to my water bowl to get them nice and wet, so that they’re perfect. Then I began to wonder . . . if this cornucopia of cool stuff is in this bag, what abundance might await me in the trash can??Well. Let me tell you. I’ve found heaven in these two beautiful receptacles of my favourite things. And I was up most of the night, picking new things from both places to take to my water bowl. At one point, I got so excited, I actually dumped over the whole bowl. It was OK though, because then I just dumped everything I liked in the water spill. Nirvana!Well, when Kris got up (and so late, too! 5:30 a.m.!) she scolded me. She also kept telling me “NO!” when I tried to get more stuff out of the trash can. Then, do you know what she did? She took the trash can and put it behind a big door! I can’t get to it anymore! RATS!Oh, look! There’s a sock! I’LL GET IT!
March 11th, 2007
I licked that little version of Randy. How did he taste? Like teenage boy. Not really to my taste. I like raw cow much better.

I’ll try to get a couple of head shots and include those, too.

January 30th, 2007
I’m not quite sure what to make of all this. First, I thought I was going to the vet and I yelled and screamed all the way, so they threw a blanket over the box, and that helped a bit. Then, they dumped me in this place I’ve never seen before, which obviously had a cat at one point many years ago, but I can still smell it. But all these banisters. Wow! I can walk from downstairs all the way upstairs without touching the floor. These people better watch out, or I’m going to jump on their heads! I’ve already made myself quite at home in Randy’s office, pushed his papers off his desk, because the space on this bookshelf is mine, after all. Don’t tell anyone, but I think my mommy misses me, and I miss her too. She already sent me e-mail. I’d reply, but I can’t really type. The place is SO big. So, I think I’ll just follow Randy around a while. He thinks I’m heeling, like a dog, but that’s just to mess with him.
January 29th, 2007
It’s late, I’m the only one up, and bored. So, if anyone wants to know about me, here’s my pedigree. There’s a horrible rumour that all the really cool toys (breakables) are being put away where I can’t get to them. Bad people! Bad people!
January 28th, 2007
Chevey was unavailable for comment and did not return our calls.