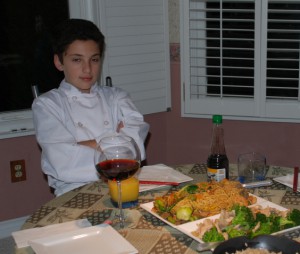 This space is where I get to talk about my own stuff. My dad may edit it, but it’s mine, all mine, so be afraid.

June 5th, 2007
Now that Heck’s Kitchen is up fully, I’ve decided to go back into frequent blogging. I made a dinner in the training kitchen, which consisted of broccoli soup, two sauce chicken, and noodle rice. The noodle rice was good fresh. A good holiday recipe in the winter. I’m hoping for Heck’s Kitchen Burritos tonight, but that a hope, we are probably having sushi. I aslo have to deal with the Intern’s Birthday tomorrow, but what the Heck.
April 16th, 2007
This weekend was full of Heck’s Kitchen goodness. While I was just the camera man for Project Sushi (Rhys’ Assignment), I was the spearhead in the kitchen for Sunday night’s dinner. That consisted of egg-fried rice done in Head Chef Randall’s wok (boy did Dad have fun with that) Chicken two ways, and Assistant Kris’ green beans. Great success. Thanks for all your help, Dad.
March 25th, 2007
Our first big dinner in a long time had me and dad running around the kitchen like idiots for the most part, but the end product was well worth it. Personally, the sauce for the tuna could use some work, but otherwise, the meal was great. We must have done well, because we got someone who hates tuna to swallow the appetizers whole. Great job dad. That’s all for now, cause I’ve got some cheesecake to steal. I mean…Uh…Check my e-mail…Yeah, that’s it….
March 21st, 2007
Last night was the first true meal in Heck’s Kitchen and I can attest that it was amazing. The fried rice was delicious. The meal was well worth it, even with me having to hang behind the stove to retrieve a pepper shaker which Chef Randy dropped.I also complete my first dinner service away from home, with the assistance of my grandmother. I can say that I am totally ready for the gala.

Cheveyo keeps trying to eat me. He licked me earlier in the kitchen, and I guess I tasted good. *shudder* That’s all for today.

March 5th, 2007
Although i have been cut off from Heck’s Kitchen this week, I have still been working hard, and have recently created the best apple crumble recipe I’ve ever had. I hope to try it out once Heck’s Kitchen is back into the running, but until then, I’d better keep practicing.I feel kind of guilty that I’m creating some cool meals away from Heck’s Kitchen, but if I am getting frowned upon for it, remember that I have no apparatus to work with in the big HK house.
February 24th, 2007
Another successful dinner in the kitchen on my own. This was, again, at my mothers house, so dad couldn’t enjoy the Chinese New Year-themed dinner. But, how would I have made it at Heck’s (Makeshift) Kitchen anyway?

As soon as the Heck’s Kitchen is up and running again, the giant gala will happen, and that’s when I’m going to put my cooking skills to the test… On my friends and family, meaning there’s very little chance of criticism.

To be perfectly honest, I’m a bit sick of eating out so much, especially since the main thing we go for is wings. Believe it or not, it gets tiring after a while.

The new cat is a great addition to the family. Thing is, everyone loves it so much, I don’t get to bond with it at all. (No finger pointing…DAD…)

December 2006
Well, along with the launch of the site, I also completed my first dinner alone in the kitchen. It was a rather conventional dinner, just a simple Caesar salad to start, followed by an interlude of mango sorbet. I then served my homemade thick-crust pizza. For dessert, I constructed a large fruit platter of pineapple, raspberries, and grapes. Although simple, the dinner went over quite well.

I want to see how many different types of cuisine I can try before the holidays are over. I’ve got a whole week to use and I plan to make the most of it.

The random color co-ordination complaints and worries about everything that isn’t directly related to cooking make absolutely no sense to me whatsoever.

Most likely the first and only Heck’s Kitchen dinner this month will be on New Year’s Eve. Personally, if any of us (including me, I am the teenager) plan to stay up, I doubt that stuffing ourselves with food at 7:00 is a good idea. My suggestion would be an easy, but not quite filling meal that we can all enjoy throughout the evening, and also we could eat smaller lighter things after dinner to help keep us up late, but that’s just my idea. Dinner should be early, say 6pm, so that we don’t fall asleep.